Picture this: You’re in deep financial trouble, so you ask a comfortably-off friend if they can lend you £1000 for a while. They say yes, but the loan will be at 5% interest, compound, and if you haven’t paid it off by a certain date, they will take possession of enough of your stuff to compensate them. That would be the end of the friendship. It would be glaringly obvious that your so-called friend was not helping you but taking advantage of your weakness. It’s one thing to pay back the £1000, quite another to pay any more than that. (You might buy them a little present or give them a treat when you’d done so, just to show you appreciated their help, but if you simply gave them some extra money, that would embarrass any true friend.)

Lending at interest, especially high rates of interest, is properly called ‘usury’. Usury refers to a relationship between strong and weak, in which the strong (the lender) expects not just repayment of a loan, but interest on top of it. Usury has been around for millennia, and reviled for allowing the rich to free-ride on the labour of others; at various times it’s been banned by some religions, mainly for this reason. The story of the borrower getting deeper in debt, having to work for the lender, or give up their property, or being thrown in a debtors’ prison is an old one, but modern usury operates in more impersonal but no less exploitative forms. The usurer benefits from the borrower remaining in debt, as long as they keep paying them interest. The net flow of money is from borrower to lender, not the reverse. In these circumstances, it’s the lender not the borrower, who gets the free-ride.

So it’s strange how we are told that debtors should repay their debts as if that were only fair. It is if it’s just a matter of returning the principal (plus administration costs and interest to cover inflation), then OK, but anything above that is unearned income for the lender. Even then, we need to check to see if the pre-existing situation under which the borrower came to seek the loan was fair, or if the creditor was helping or hindering them in becoming more economically sustainable. 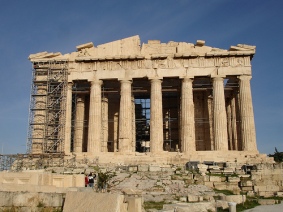 risk, but as we see in the Greek debt crisis, when the risk turns bad, the lenders can’t stomach taking a loss, and try to push the risk onto the debtor, or onto the public, as in the case of bank bailouts. And they usually have the political clout to do so. If interest is a payment for risk, then either the lender shares in that risk or it is money for nothing. For the lenders, these debts are ‘assets’ – sources of future income – and many have banked on getting the payments.(1) So the lenders are being bailed out. 92% of the €252 billion from the Troika (IMF, ECB and EU) that Greece received went to bailing out private lenders; only the remainder went to the Greek people. Sure, earlier Greek governments ‘agreed’ to the contracts, but they did so over the heads of the Greek people, and increasingly they have to negotiate under duress. Usury is precisely a relationship between unequals in which the borrower has fewer options than the lender.

The usurers don’t just want their loans and interest repaid, they want the borrowers’ property, and the debt is a useful stick to beat them with to get it. In classic neoliberal style, they demand privatizations – sell-offs of key state assets, particularly those that can provide rent for the owner. Before Syriza took power and stopped it, a body called the Hellenic Republic Asset Development Fund was busy selling off Greek assets from resorts, ports, marinas, golf courses, regional airports, government buildings (sale and leaseback), to rail transport, water supply, roads and energy. As it says on its website: “Privatisation is not seen as a mere sale of assets; rather, it is the key element in re-establishing credibility, itself the basic pre-requisite for Greece’s return to global capital markets.” The programme was set up as a condition of Greece’s earlier €245billion bailout.[2]

The other part of the usurers’ medicine – austerity – is not even in their own interest for cuts in income just depress spending and hence what businesses can sell, and the country’s ability to repay debts. Over 50+% of young people in Greece are unemployed. How can you make an economy viable by making its most valuable assets unproductive?[3] Austerity has shrunk the Greek economy by more than 20% since 2010 so its debts have become relatively larger, from 133% of GDP in 2010 to 174% in 2014.

A history lesson from Germany that it wants to forget

After the First World War, Germany was made to pay reparations of $33 billion – a burden which triggered hyperinflation and economic misery for many ordinary German households. At first the US intervened to stagger the payments and provide loans, but after the 1929 crash, it demanded full repayment of the loans. The result was economic decline and unemployment of 6million – fertile ground for the rise of Nazism. After World War Two, the cancellation of debts and the US’s provision of aid under the Marshall Plan enabled Germany’s economic recovery. Greece was one of the countries that took part in that debt cancellation. But of course, now, the roles have been reversed, and Germany will not consider acting similarly vis-à-vis Greece. (Greece’s own Nazi party, Golden Dawn, would benefit from more immiseration by the German-dominated Troika of the EU, European Central Bank, and IMF . . .)

[1] As in Spain, many of the loans were made recklessly before the crash by private banks in and outside Greece, against property, inflating property bubbles.

[2] http://www.wsj.com/articles/greece-open-to-selling-all-its-major-ports-1402070040 – see the wonderfully sarcastic comment from Basil Coukis, recommending selling off the Acropolis so it can be turned into a theme park.

[3] Much has been made of failures of Greece’s past governments to enforce taxes on the rich and the upper middle classes. This problem is not limited to Greece: As the HSBC scandal shows, Britain’s own government is in favour of such non-enforcement where the rich are concerned.

1 thought on “Greece and EUsury”