I’m very happy to say Why We Can’t Afford the RIch is now published, and available here

The launch was on Tuesday 25th November in London. The talks and discussion were expertly chaired by Polly Toynbee, and after a short overview of the book by me, and a response by Richard Wilkinson, of the Equality Trust and co-author of the excellent The Spirit Level, there was a lively debate on the book’s analysis and on what needs to be done.

Doreen Massey spoke about the need to identify what specific issues touched ‘raw nerves’ among the public, that might be linked to more general issues of the critique of neoliberalism’s support for the rich and super-rich. Ann Pettifor argued for campaigning for full employment (among other things). There were questions about the distinction between the idle rich and the working rich (see p.104ff in the book). There was some discussion of inherited wealth and inheritance taxes. Others spoke about the need to challenge the social norms about what different kinds of work are worth, and what jobs needed valuing more, and funding more. Climate change and the role of big energy companies was another topic. And as if those issues weren’t big enough, we also got onto big questions like what is an economy for?; what is wealth? (is it just accumulated stuff, or money or the circumstances that enable people to flourish).

So it was a constructive and refreshing debate. I hope the book prompts more people to join in.

The week before I did a pre-launch lecture on the book in Cardiff. You can watch this here:

The continuing story of the New Era estate – already the subject of two posts here – where the existing residents are set to lose their homes as a result of its purchase by Westbrook Partners of New York who want to replace them with tenants who can afford 3 times as much rent.

But the campaign is gathering strength. The mayor of New York has condemned the firm for its ‘predatory’ behaviour in his city. But Boris Johnson, mayor of London is dragging his feet over the whole issue. See the latest video on this, featuring the campaigners, here: 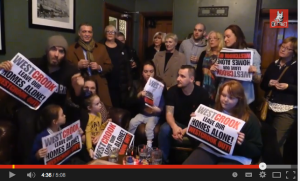