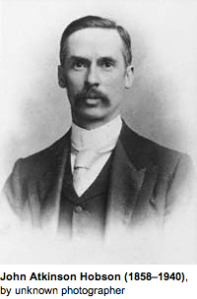 in, obviously. And unlike patio heaters, leaf blowers or jet-skis, it’s an absolute necessity. And that’s what it is for most of us.  But it’s also a necessity that is in short supply and very expensive. This means that those who have more of it than they need for their own use, can also use it for extracting unearned income from those who have none. It’s unearned income because, apart from maintenance or improvement costs, it’s something for nothing, because the housing already exists. Whether it’s small-time buy-to-let housing for students, or big time property magnates buying up estates in inner London, it’s what J.A.Hobson, writing at the end of the 19th century called ‘improperty’: property used not to live in or produce things with, but as a means to extract rent from those who don’t have such property and can’t afford to buy it.

This video from the Guardian is a must: it links the wealth extraction practices of major property companies to the human costs paid by people like the residents of the New Era estate in London. Westbrook Partners, the US firm that is buying the estate, intends to push up rents far beyond what the current residents can afford. True, they will have to do some refurbishing to persuade richer tenants to move in instead, but what they are after is not merely payment to cover those costs but a major flow of unearned income simply from their control of the property. They get this simply because they can.

Is it right that people should be made homeless in order to get more rent from property? Is it right, indeed that housing should be used primarily as improperty rather than essential property?  Just to be clear, I’m not questioning ‘private property’ here. Owning your own home for your own use is fine, just as owning your own furniture or socks is fine. And if land values weren’t so inflated, more people could afford to buy their own home. What I am questioning is private improperty.

And social housing is fine too, for here the rent charges need pay only for construction and maintenance costs. (While we include these in the term ‘rent’ in everyday life, in economic theory, the term excludes such payments.) But if local authorities have to borrow money to build housing and they pass on the interest charges to the tenants and other local tax or rate payers, then this sets up a conveyor belt of unearned income flowing first as rent to the local authority, and then passed on as interest to the lenders. (As I explain in my book, interest payments are another form of unearned income.)

The film says Westbrook Partners have ploughed $11billion into property on behalf of ‘investors’. How altruistic. The big time ‘investors’ are generally the rich and super-rich. But as the film says, there are also ‘investors’ like workers’ pension funds – for fire fighters in the illustration. All pensions, whatever their form, are ultimately a means by which those too old to work are funded by those young and fit enough to do so. This can be arranged by democratically-approved transfers between these two generations through state pensions. As such they are likely to be based on judgements of what the recipients need, and what the ‘donors’ can afford. But private pension funds operate on the basis of power, not consent and need. By controlling sources of unearned income – rent, interest, profit, dividends, speculative gains – those who can afford private pensions – mostly the better off half of the population in the UK – can piggy-back on this power to extract wealth from the economy to fund their pensions, and without the consent of those the money ultimately comes from.

Maybe, like so many of the rich, Westbrook probably imagine that they are special ‘wealth creators’, but they are primarily wealth extractors. Their success is the other side of the stagnation or decline of incomes among the majority. It’s also got a lot to do with why many households have to spend more of their income just on having a roof over their head.

And it’s not only unjust but dysfunctional for the economy:

“In modern Britain, it seems, putting up the rent is somehow regarded as economic growth. The US dominates in technology. Germany makes millions of cars, Japan still makes consumer electronics. Britain produces buy-to-let landlords. How our competitors must envy our success.” (Patrick Collinson, Guardian, 2006)

1 thought on “What is housing for?”