I reported in my last post on Richard Benyon, the rentier (and richest MP at Westminster), and the tenants of the New Era Estate in London. His family firm Benyon Estates had joined a consortium buying up the estate in order to push up rents by up to 400%. Inevitably, this will drive the current tenants out, probably into extreme hardship. This is one example, of a wider process of rent hikes driving out low income people from the centre of big cities. It’s a kind of ‘social cleansing’.

Well, thanks to the tireless campaigning of the New Era tenants, who have brought this to the notice of the public, Benyon has been shamed into withdrawing from the consortium. (Maybe shamed is too strong a word. He protests  – boasts? – that his family have been landlords in the area for 125 years. So what? Is that supposed to show some kind of moral commitment or loyalty? Are we supposed to think of him as a ‘custodian’ who has done everyone a favour by looking after his properties?)

What it does mean is that they have been extracting unearned income in the form of rent from residents for that period – ‘in their sleep’, and living off the labour of others, as John Stuart Mill said of landlords back in 1848.

But though this is a symbolic victory for the tenants, it’s not an economic one, because the rest of the consortium  – Westbrook Partners, a New York-based property ‘investment’ company, i.e. a rentier organisation – is still pursuing the deal. So the tenants are now going after them. As reported in the Guardian, Westbrook have form in the rentier game. You can support NewEra4All and sign their petition to Parliament at Change.Org 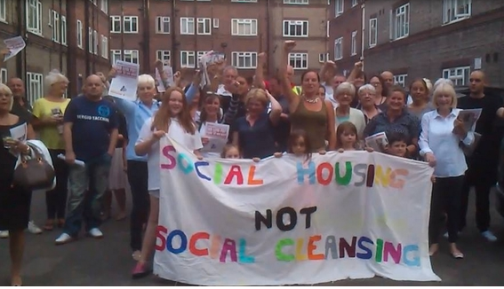 The fact that Benyon is the richest MP in Parliament, that he voted for the hated bedroom tax on people in state housing – while having his own palatial pile in Berkshire, and that he has consistently defended landed interests, joins up several dots. But it would be a mistake to think that the problem was just one of a rogue landlord and establishment politician.

The problem is private landlordism, especially under-regulated landlordism in general. It’s a way of free-riding on the labour of others, for once you deduct construction and maintenance costs from rent, it’s pure unearned income for the landlord – something for nothing. It allows them to reap where they have not sown, as Adam Smith put it, or to extract payment for a disservice, as Winston Churchill put it. Other leading political economists, from Thomas Paine, David Ricardo, J.S. Mill, Karl Marx, Henry George, R.H. Tawney, J.A.Hobson, through to contemporary authors like Michael Hudson and Ann Pettifor have agreed. Neoliberal governments, have been throwing money at rentiers, most clearly through their buy-to-let and build-to-let schemes.[1]

Whether the landlord’s name is Richard Benyon, Westbrook Properties, or Joanne Bloggs, the game is the same, and it’s the game that we need to stop.

We need a land-value tax, and as the New Era residents say: social housing not social cleansing!

[1] Actually, neoliberal economic theory, does not endorse landlordism. Even guru Milton Friedman favoured a land tax as ‘the least bad tax’. But neoliberal politicians’ priority is courting power and money, not following a theory, and they prefer not to know the difference between creating wealth and extracting it from others through rent.